The spoiler effect is where two or more candidates/parties split a majority of voters with a similar ideological outlook and let a candidate/party with opposing ideology get elected on a minority of the vote. This happens regularly under our present first-past-the-post system. The Alternative Vote (AV) eliminates the spoiler effect.

Here are the results of the 2007 election in the ward of Moulsecoomb & Bevendean in Brighton and Hove where Labour held onto 2 seats and the Tories gained 1. 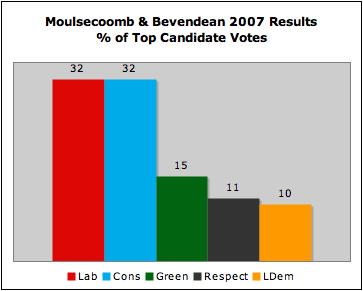 Looking at these results, it may seem easy to conclude that this is a straight fight between Labour and the Tories and that anti-Tory voters should vote Labour to stop them, with Labour losing out because a minority of anti-Tory voters have backed the Greens, Lib Dems and Respect.

However since the election of Caroline Lucas last year and the growth in the Green vote generally since 2007, the anti-Tory vote could easily be evenly split between Labour and the Greens, so it is fairly impossible to judge how this is going to go. It is difficult for the anti-Tory voter to know what to do because although Labour are doing better in the national opinion polls (they were on 26% in 2007 and are on around 40% now), the Greens have seen massive increases in their vote right across Brighton and Hove. Their vote could easily double and put them in contention for winning seats. However it could just mean the Tories could lose votes and still win because of this split in the anti-Tory vote.

Also M&B is in the Brighton Pavilion constituency that Caroline Lucas won. Here the Green vote has increased from just 22% in 2005, to 31% in 2010 and has probably increased even more since then. A large part of the Labour campaign then and now has been leaflets using the FPtP classic line 'don't vote for the Greens, because it will let the Tories in'. This is the line the Labour party have shamelessly used right across Brighton and Hove, even in wards like mine - Goldsmid where it is clearly ridiculous because Labour came third and the Greens are first!

Of course, if we had a preferential system (in local elections where we have multi-seat wards, it makes sense to use the Single-Transferable-Vote, which is a more proportional progression from AV) we could stop this sort of campaigning dead and kill off the spoiler effect.